Your search found 1 match. The following is the full list of ACT testing locations in Kiribati among which you can pick one to take the exam. Please know that on the test day, test takers can use any 4-function, scientific, or graphing calculator. On the table below, you can also find all test dates through 2019. 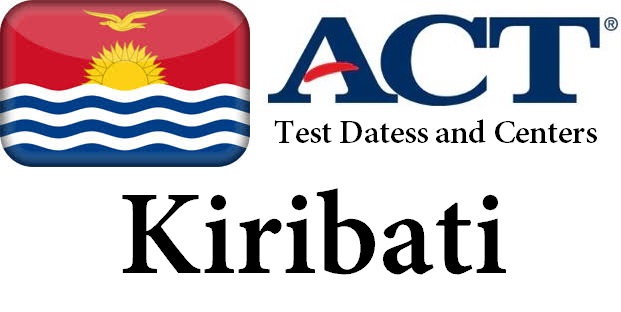 Kiribati, republic in the Pacific Ocean, located on both sides of the equator. It includes the Gilbert and Phoenix Islands, Banaba (Ocean Island) and eight of the eleven line islands; The main atoll of the Gilbert Islands is Tarawa. Copra extraction and fishing are economically important. – The islands were first visited by Spaniards in 1576. The area had been under British ownership since the end of the 19th century, and in 1979 it became independent as Kiribati. Check baglib to see History of Oceania.

Kiribati is part of Micronesia and extends over 4,500 km along the equator (2,050 km north-south extension). The 33 islands and coral atolls are divided into the western Gilbert Islands and the volcanic island of Banaba (formerly Ocean Island), the Phoenix Islands and the eastern Line Islands with Kiritimati (formerly Christmas Island; one of the largest atolls on earth). With the exception of Banaba (up to 81 m above sea level), the palm-lined islands rise only a few meters from the sea. With no rivers and few freshwater lakes, the lack of freshwater is a major problem.

Kiribati has a hot, tropical climate with very little seasonal temperature fluctuations. During the day the temperature reaches values ​​of 27 ° C to 34 ° C. The islands are in the area of ​​the equatorial zenith rain with strong fluctuations in the annual rainfall: The rainy season lasts from October to March. The northwest trade wind prevails from March to October. Hurricanes repeatedly cause great damage. More precipitation falls on the northern and southern islands than on the equatorial ones, where periods of drought occur irregularly. The average annual rainfall is 2,500 to 3,000 mm on the northernmost and southernmost islands and around 1,000 mm on the equator, on the main island of Tarawa about 1,500 mm.

Coconut palms and pandanus trees grow on the coralline, barren soils of most of the islands. – Nature conservation: Due to its low altitude, Kiribati is one of those countries that are threatened in their existence due to the rise in sea levels as a result of climate change. In 2006, the Phoenix Islands and the surrounding marine area were declared a marine reserve and in 2010 they were included in the UNESCO World Heritage List (Phoenix Islands marine reserve).

The constitution guarantees freedom of religion. All religious communities are legally equal. – According to the latest available surveys, around 55–57% of the population belong to the Catholic Church (Diocese of Tarawa and Nauru). The second largest Christian group are (post-) Reformation denominations (especially the »Kiribati Uniting Church« [approx. 31–34%]). The few Anglican Christians belong to the Anglican Church of the Province of New Zealand. Mormons are strongly represented with around 5% of the population. In Seventh-day Adventist Church around 2% eliminated. The largest non-Christian religious community are the Baha’is with more than 2% of the population.