Your search found 1 match. The following is the full list of ACT testing locations in Bosnia and Herzegovina among which you can pick one to take the exam. Please know that on the test day, test takers can use any 4-function, scientific, or graphing calculator. On the table below, you can also find all test dates through 2019. 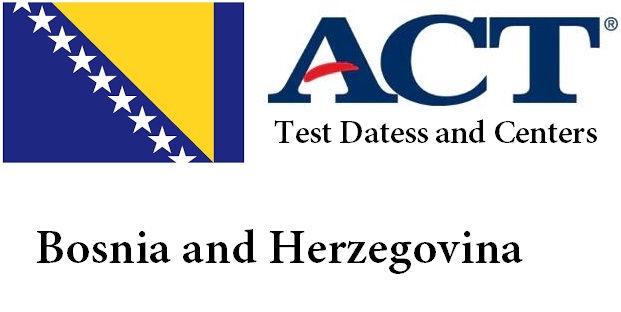 More about Bosnia and Herzegovina

The country’s population is made up of members of different nationalities and religions who lived in settlement areas that were mixed like a mosaic until the 1992–95 war. The war completely changed the distribution of the population; Diverse refugee movements and expulsions have led to the emergence of new ethnic settlement patterns. The proportion of the population of Bosniaks is officially given (2016) as 50.1%, that of Serbs with 30.8% and the proportion of Croats with 14.6%. Most of the refugees only returned to their old hometowns if they did not end up in an ethnically foreign environment. Since then, further internal migration has increased ethnic segregation within the country. According to the 2013 census (results published in 2016), the Federation of Bosnia and Herzegovina (FBiH) had 2.22 million residents and the Serb Republic 1.23 million residents. The average population density is (2017) 68 residents / km 2. The proportion of the urban population is 40%.

The biggest cities in Bosnia and Herzegovina

The ethnic structure of Bosnia and Herzegovina is reflected in the religious and denominational relationships: According to the latest available surveys, Bosnian Muslims (Bosniaks) form the largest group (almost 51% of the population), followed by Orthodox Serbs (around 31%) and Catholic Croats (a good 15 %); around 3% of the population belong to other religious communities (Protestant Christians, Jews, etc.) or have no religious affiliations. As Sunni Muslims, the Bosniaks follow the Hanefi school of law and have their own spiritual head based in Sarajevo. The head of the Orthodox Christians is the Patriarch of the Serbian Orthodox Church. The Orthodox church structure includes the Archdiocese of Dabar-Bosnia (seat: Sarajevo) and the dioceses (eparchies) Banja Luka, Zahumlje-Herzegovina (seat: Mostar) and Zvornik-Tuzla (seat: Tuzla). The Catholic Christians belong to the ecclesiastical province of Vrhbosna (Upper Bosnia) with the Archdiocese of Sarajevo and the suffragan dioceses Banja Luka and Mostar-Duvno (seat: Mostar). Further, numerically disappearing churches are the “Old Catholic Church in Bosnia and Herzegovina” and the Lutheran “Evangelical Church in Bosnia and Herzegovina”. The Jewish community of Sarajevo, historically dating back to the middle of the 16th century (founded by Sephardim, Jews expelled from Spain),

Since the late 1990s, leading figures from all three religious communities have been trying to bring the various ethnic groups closer together. The Christian-Muslim meeting in Zenica in 1997 and the meeting of all Catholic and Orthodox bishops of the country in Tuzla in 1998 were important steps on this path, the long-term goal of which is the restoration of internal peace in Bosnia and Herzegovina.

There is a predominantly temperate continental climate, which is only influenced by the Mediterranean in the south and in the area of ​​the Adriatic coast. In Sarajevo (540 m above sea level), in the central Bosnian mountainous region, the mean January temperatures are −0.9 ° C, the mean July temperatures 18.9 ° C. In view of the cool, humid climate with annual precipitation close to 1,000 mm (in the Hochkarst also above) and long, snowy winters, extensive mixed forests cover around 43% of the country’s area. The landscape has the character of a forest mountain area, but its stocks only change into natural vegetation with increasing altitude. In lower elevations, centuries of use for grazing purposes have largely degraded them to poor bush forest. There are several national parks in the mountains.